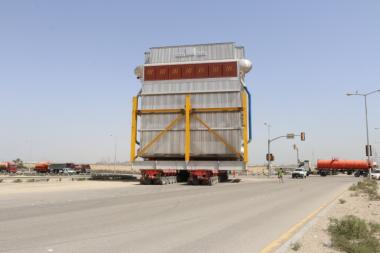 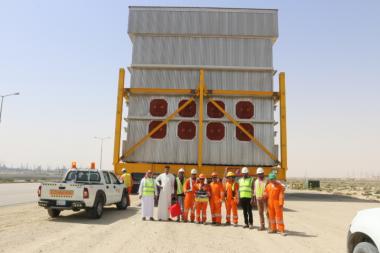 Transporting oversized loads presents its own unique set of challenges, which Almajdouie Logistics is no stranger to. In this case, transporting a large boiler from Jubail industrial port to the Fadhili power plant required fine coordination by the Almajdouie team as fences, gates, light poles, and even power lines had to be moved to accommodate the cargo.

Overall the load measured 14.97 x 14.07 x 17.70 meters (L x W x H) including the height of the trailer, which presented significant logistical challenges. Two 18-axle lines were used side by side to carry the boiler. The first step was to bypass port’s 13-metre high conveyor belt by partially removing fencing and the port gate. The second challenge was to avoid the 11-metre high 380 KVA MARAFIQ power lines, which could not be turned off because it would disrupt MARAFIQ’s water production.

The alternative route passed through the SADARA ARAMCO plant, and the Almajdouie team held several meetings with SADARA management and security department to secure the necessary permissions to pass the convoy through their premises. A plan was drawn up by the LHL engineering department, and two gates were removed at the SADARA plant to accommodate the load.

The next challenge was the width of the old Kuwait road, which is 7 meters, whereas our trailer was 7.5 meters wide with a minimum requirement of 9 meters to manage the movement. A civil contractor was hired by LHL to complete this task, and Ministry of Transport approvals were secured, as a total of 63 light poles needed to be removed in the Jubail industrial area. Furthermore, power lines had to be shut down and lifted by SEC in five different locations along the route.

The entire operation was completed ahead of schedule, in just 13 days as compared to the estimated 17 days, and the boiler was delivered safely without incident.