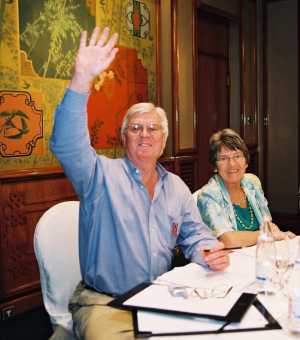 Founding PPG Member and close friend, Mr. Cecil More, has announced his retirement. Cecil and his lovely wife Jean (pictured right), in the interim plan to devote their time between their 55 acre retreat in the mountains at Bushmans Nek, as well in their Durban home.

Cecil started his career in shipping in the early sixties when he joined the Durban Port Office staff and learnt all about the operational side of one of the busiest ports in Africa. He then joined William Cotts as a Marine Boarding clerk. Determined to learn all there was to know about Ship’s agency and his chosen career, he made it his business to get hands-on experience in every department, spending time on the freight desk, claims, trade development etc. William Cotts became Mitchell Cotts Maritime and Cecil continued his climb up the Company ladder. He helped develop many new lines, cut his teeth on Breakbulk Cargo to far-flung corners of the Globe and was one of the first to realise the potential of the “ineluctable box” that has so changed the face of shipping.

In the eighties he was promoted to Assistant Manager and then eventually became Manager of Mitchell Cotts Maritime in Durban. With this promotion came the post of Honorary Swedish Consul, a post traditionally held by the Manager of Mitchell Cotts. In 1987 the Norwegian Foreign Affairs appointed him Honorary Consul for Norway in KwaZulu-Natal and the Eastern Cape. Later that year, Mitchell Cotts’ Maritime disinvested in South Africa, and despite being offered the post of General Manager Ships Agencies to the Grindrod Group who had taken over Mitchell Cotts, Cecil made the decision to start his own Company, taking 3 co-workers with him, and Seaclad Maritime was the result. The Swedish and Norwegian authorities decided to break with tradition and the post of Consul in KwaZulu-Natal remained with Cecil.

Jean abandoned her career as Remedial Teacher and took charge of the Accounting side of the company. Seaclad went from strength to strength and, although the main focus was Ship’s Agency, with the combined experience of the four Directors they were prepared to tackle anything and many opportunities presented themselves to the dedicated team. In 1988 they were asked by Hetherington Kingsbury, the Australian Aid Cargo Agents for Africa to handle the Australian Aid parcels into Southern Africa and this was the start of some very exciting and challenging “projects” into various African countries.

In 1992, Cecil decided to start a new venture which he aptly named Mariner Shipping & Trading (Pty) Ltd., with Cecil as the “Ancient Mariner” and Jean as his “right-hand man”!!  Because of the Australian Aid cargo connection, the new company began trading as HK Shipping and has done so ever since, becoming almost a household word in shipping circles. In 1999 HK started his working relationship with the inimitable Kevin Stephens.  Kevin had the full support of HK Shipping in his decision to start the PPG.

Cecil and Jean’s links to Australia have strengthened over the years and both their daughters have ended up with their young families in Perth. After much soul-searching the decision was made to close HK Shipping and to retire to Australia, so, regretfully, HK Shipping will not be able to represent the PPG is South Africa but the baton has been passed to HK’s very able Operations man, Vino Ruthnum now Project Manager at Aviocean Natal cc. (owned and managed by Des and Ellen Sutherland).

Highlights of Cecil’s career include meeting many famous South Africans such as Nelson Mandela, ex-president F. W. de Klerk, President Thabo Mbeki, Bishop Desmond Tutu, The King & Queen of both Norway and Sweden and so many, many fascinating and knowledgeable fellow PPG project specialists!

We wish Cecil and Jean every happiness for the future and take this opportunity to thank them both for their loyalty, support and friendship.