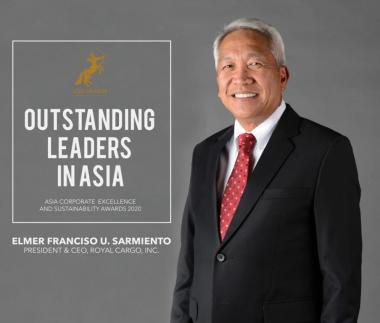 All at Project Professionals Group (PPG) congratulate Royal Cargo President, Elmer Francisco U. Sarmiento for adding another feather in his cap after bagging the Asia Corporate Excellence and Sustainability (ACES) Awards’ Outstanding Leader in Asia 2020 title. The Outstanding Leaders in Asia award is given to exceptional leaders who have demonstrated sound leadership to spearhead growth and prominence for the company.

Elmer, in his over 40 years of service with the company has brought milestones for Royal Cargo. He is the forefront of the company’s projects and heavy lifts units, which is now recognized as one of the industry leaders in the industrial projects and heavy load transportation in the Philippines. Also, as he is known for making calculated risks, Elmer started the expansion of company operations by acquiring assets and integrating other businesses to reinforce and strengthen the company portfolio.

Elmer is highly respected by colleagues for his business acumen and genuine compassion for his employees. He is a perfectionist who strives for excellence in all of his endeavors. His character has inspired fellow co-workers to always give their best shot. In 2015, Royal Cargo’s project transportation unit was named Best Project Logistics Services Provider in the Philippines by Frost and Sullivan. Thanks to Elmer’s leadership and guidance, these are key ingredients in building a culture of excellence within the company.

He is a firm believer of embracing change and learning to thrive in the roller coaster of transition. This principle inspired the company to power through the biggest obstacles and failures, and enabled Royal Cargo to establish its position as one of the industry leaders in the field of transportation and logistics in the country.

“It is such a great honour to be chosen as one of the Outstanding Leaders in Asia. Over four decades of my hard work and determination to bring the company to where it is today, has now been noticed by the ACES Awards,” said Elmer, who also promised to continue the programs he started to ensure that Royal Cargo will provide top-notch and quality end-to-end logistics solutions for its clients.

WORDS FROM THE JURY PANEL

“Not all top executives are hard-hitting, aggressive individuals. Royal Cargo’s Sarmiento demonstrates the gentler aspects of leadership which is people-centric, but ultimately driven by a sure grasp of the lay of the land where his industry is concerned”.

A man of humble beginnings, Elmer Francisco U. Sarmiento has overcome many challenges in his personal and professional life. In particular, a labour strike in 1990, led to a suspension in operations and a downturn in investments. In order to quell the protests, the company had to weather a diminishment in assets.

The CEO remains undaunted. “There’s always a first time,” he says. “Failures are just steps towards success. My failures were memorable and powerful. It made me stronger and wiser.”

Sarmiento’s stint in SGV would eventually serve as his launching pad to Royal Cargo, where he availed himself to the practice of logistics and general management.

Royal Cargo, which Elmer has helmed since 2002, is a company offering unique logistics services in the Philippines. Additionally, Royal Cargo boasts their own fleet of equipment and facilities. The company also offers self-improvement and developmental programs that, amongst others, span the technical aspects of the business. “Our employees are proud to be part of Royal Cargo Inc.” the savvy top executive gushes.

Royal Cargo is also committed to several Corporate Social Responsibility (CSR) initiatives, including funding and support for NGOs and schools. “We offer our equipment and expertise for free to various NGO’s and to the Red Cross to help evacuate and save people in disaster-stricken areas,” Sarmiento beams. “We’ve also donated Henry, a fire truck, to the City of Paranaque.”

The top executive, who was selected as one of Smart Enterprise Global Filipino Executive of the Year during the Asia CEO Awards in 2017, shares his insights on the meaning of real success and true leadership by saying, “A person is successful if he is respected and is looked up to by people.” He reflects, “I believe I am a gentle person, which is different from being authoritarian or autocratic. I’m not pushy and believe in leading by example.”

“I think the difference lies in my engagement with a lot of people. I ask a lot of questions, analyse issues with them and share my thoughts. Being honest and responsible makes a good leader,” the CEO opines. “Integrity, being an exemplar at work and maintaining a positive attitude remain keys to leadership. I think my leadership style was developed over the years through observation of other leaders such as my bosses, my peers and colleagues.”

“I am a participative leader. I like to hear others’ opinions and thoughts and seek their input, ” Sarmiento continued. “Ultimately, I make the decisions and am responsible for them.”

“Winning an award, especially the ACES Awards is a recognition of my ability as a leader. This nomination is not just my own but my co-workers as well, who contributed to the success of the company.”

“Not all top executives are hard-hitting, aggressive individuals. Royal Cargo’s Sarmiento demonstrates the gentler aspects of leadership which is people-centric, but ultimately driven by a sure grasp of the lay of the land where his industry is concerned.”